Legends Baseball is now accepting tryout registrations for new players only for the 2021-2022 season. This will only be a one day tryout will give players the opportunity to showcase their skills in hitting, fielding and pitching. For 9u-12u players you only need to attend one of the dates listed. The tryout fee is $50 per player. We encourage all players to attend our main tryout, however those who can't attend please contact Rusty Tucker at rusty@legendsbaseball.net 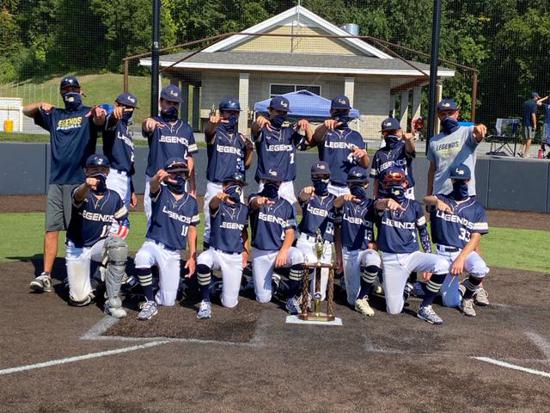 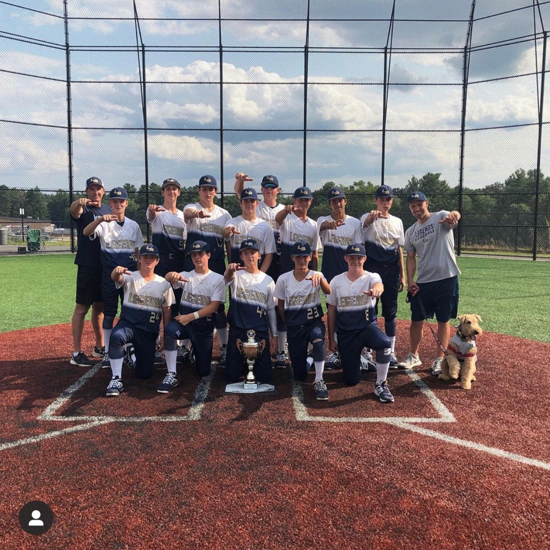 The 14 Legends Prospects won the 2019 Elite Baseball League Division 1 championship going 5-0-1 over the two week playoff tournament.  In the opening weekend  the 14’s took two from Team Boston then had a win and tie versus the Triple Crown Kings.

In game 2 the Prospects finished off their perfect 4-0 weekend with a 8-6 victory. The offense was lead by Gamelli 2 for 4, Carey 3 for 4, and Fronduto 2 for 2 with 3 RBI. Jack DiFilippo (West Newbury, MA) and Crocker also chipped in with hits. Brown picked up the win throwing a complete game on 8 hits, 2 ER, and 3 K's. Joe Brienze (Charlestown, MA) played solid defense behind the plate as the other half of the battery.

In the Semi-Finals the 13 Prospects faced off against longtime rival GBG. GBG had the upper hand in their previous 3 meetings but the 13's found a way to get the win on this day.  The story of the game was Robert Brown. He was dazzling on the mound. Brown went the distance throwing 7 innings, on just 3 hits, 1 run, and striking out 10. Joey Smith (Peabody, MA) had a clutch RBI double they helped secure the victory sending the Legends into the finals.

The Championship took place on Sunday, August 23rd at the NEBC complex in Northborough. The Prospects faced off against a very talent MDB Knights team who only had one loss on the year (also given by the Prospects ). Offense was at a premium for this game with only 8 hits between both teams. The 13's got all the offense they needed in the 3rd inning when they scored their 2 runs. Colin Walsh (Melrose, MA) had a huge sacrifice bunt that set up the scoring. Gian Gamelli threw a gem on the hill going the distance on 3 hits, 1 run, and 9 K's, leading the Legends Prospects to their EBL title with a 2-1 victory.

On Sunday July 7th The 14’s grabbed a win 9-0 and tie 5-5 against the Triple Crown Kings.  In Game 1 Thomas White got the win on the mound throwing a complete game shutout.  Thomas struck out 15 allowing just 2 hits and 1 walk over the 7 innings.    Offensively  Colin Ensminger (Reading, MA) and Garrett had big games.  Ensminger was 3 for 3 with a double and 3 RBI’s.  Garrett continued his consistent hitting going 3 for 3 with 2 Runs and 1 RBI.  Gavin Donohue (Melrose, MA) also contributed with a hit and run scored.

In game 2 the Prospects let a 5-3 lead slip away late as the Kings scored 2 in the 6th.  Manca pitched very well getting the no decision going 6 1/3 allowing 4 runs on 8 hits while striking out 6.  On offense the Kings jumped out to a 3-0 lead in the first but Legends answered back with 4 runs in the bottom half.  Dominic Gabardi (Wilmington, Ma) and Manca each went back to Back with deep with home runs, Gabardi’s a 2 run blast to left center while Manca’s went about 375’ to straight away center.  Curran also had a solid game at the plate with 2 hits.  Despite the tie the 14’s captured the #1 seed heading into the second weekend of EBL playoffs.On Saturday July 13th the 14 Prospects travelled to Millbury High School where the NE Storm hosted.  In the playoff semi-finals they took on NEB North and won a hard fought game 3-1.  After trailing 1-0 heading into the 5th the Prospects put up 3 runs and grabbed a lead they would never relinquish.  Connor McClintock (Hamilton, Ma) lead the offense going 2 for 2 with 2 RBI’s.  Connor had a clutch hit in the 5th that proved to be the eventual game winner.  Chenevert and Damian Gigante (Salem, NH) also had hits.  White went the distance on the mound pushing his overall record to 13-0.  Thomas overcame some early inning jams but settled down striking out 12 over 7 to help send the 14’s into the league championship game.

In the EBL finals the Prospects took on the GBG Hawks who had defeated N’oreasters North in the semi’s.  In what was an all-time classic game the Prospects were down 1-0 heading into the  bottom of the 7th inning.  Dom Gabardi got the rally started with a leadoff single.  Manca was then hit by a pitch.  “Big John”Garrett came up clutch with a line drive single to right.  Gabardi barely beat the throw to the plate with an amazing head first slide to tie up the game.  Brune  then knocked in Manca with the game winning hit to right field and the 14’s rushed the field to celebrate their EBL championship.  Manca was the MVP of the game after coming in relief and not allowing a run over the last 4 innings.  His record now improves to 10-0 with 4 saves and 104 strikeouts over 80 innings.

The Legends go 5-0 to win the Patriots Day Tournament at the New England Baseball Complex.  The Legends outscored their opponents 39-4 in the 5 games.

In game #1 it was the Tyler Feldberg (Middleton, Ma) show on the mound.  Tyler pitched 4 innings to earn the win allowing no hits and no runs.  Connor Mackenzie (Plymouth, Ma) led the offense with 2 hits a triple with 2 RBI's. The Legends exploded for 10 runs in Game #2 vs the Strike Zone.  Tedy Cove (Worcester, Ma) went the distance on the mound pitching 6 innings, allowing one hit and striking out 7. The offense was led by Zack Webber (Hamilton Wenham, Ma) 2 hits with 4 stolen bases and Alex Clemmey (Middletown, RI) added a HR with 2 RBI's. In the final pool play game the Legends sealed up the #1 seed by defeating the Nokona Chiefs 6-0 behind Zack Webber's 6 inning gem. Ryan Lush (Woburn, Ma) had an big RBI single and Cameron Lagrassa (Middleton, Ma) had a triple with an RBI. 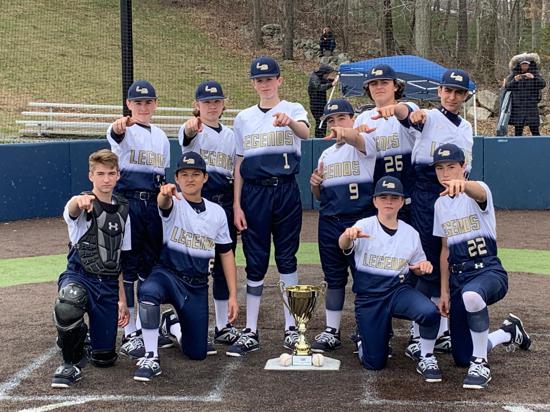 In the Semi Finals the Legends once again got matched up with the Strike Zone and the result was very similar to the first game with the Legends winning 11-3.  Troy Flood (Manchester, Ma) picked up the win on the mound with 4 solid innings and Giancarlo Miro (Revere, Ma) closed the door with a perfect inning.  The offense was led by Jace Roossien (Nahant, Ma) who had two triples and 4 RBI's and Will Cooke (Hamilton Wenham, Ma) added 2 hits and 2 stolen bases.

The Championship Game featured a rematch with the Nokona Chiefs.  Alex Clemmey was the star of the game on the mound and at the plate.  He allowed 1 hit, struck out 10 batters in a complete game effort and he also added 2 hits including a triple that drove in 2 runs. The Legends won the game 3-0 and were crowned the 2019 Patriots Day Tournament Champions. 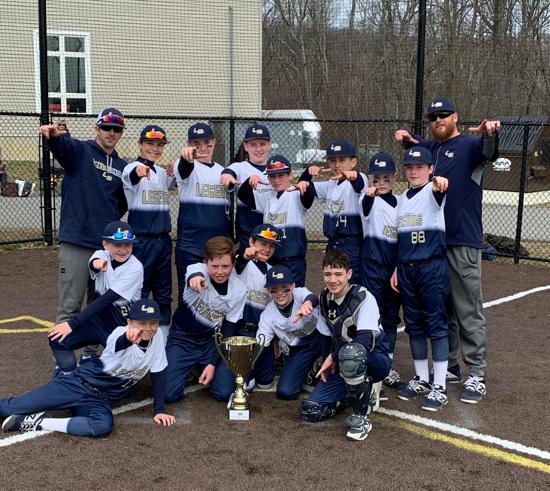 The 12U Legends Prospects go 5-0 to win the 12U April Classic Tournament at the New England Baseball Complex in Northborough Ma.

The Legends started off the tournament by going 3-0 in pool play to earn the #1 seed.  In the 3 pool play games the Legends did not allow a hit or a run. In game #1 the Legends won 8-0 against the Wolverines on a cold Friday night game.  Noah Crocker (Peabody, Ma), Shea Newhall (Lynn, Ma) and Jack DiFilippo (West Newbury, Ma) combined for a no-hitter.  In game #2 the Legends won 9-0 behind Bradley McCafferty's (Beverly, Ma) no hitter. Owen Carrey (Litchfield, NH) 2 doubles, Joseph Brienze (Charlestown, Ma) Home Run and Danati Fronduto (Peabody, Ma) Home Run and a double led the offense for the Legends.  In the final pool play game the Legends beat the NH Bobcats 9-0 behind Gian Gamelli's (Hamilton Wenham, Ma) no hitter with 10 strike outs. Patrick Clemmey (Middletown, RI) had 2 Home Runs and 2 RBI's and Colin Walsh (Melrose, Ma) added a single and a stolen base. Gar Hindle (Rye, NH) also added a base hit along with a stolen base while Cameron Willis (Georgetown, Ma) added a walk, stolen base and a run.

In the Semi Final game the Legends trailed the GBG Northeast 2-0 going into the bottom of the 5th and responded by scoring 3 runs on hits by Gamelli, Brienze, DiFilippo and McCafferty. The Legends hung on to win 3-2.  Owen was lights out on the mound for the Legends.

In the Championship Game the Legends had to face the 2018 EBL Champions Nokona Chiefs.  Nokona scored a run in the first inning but the Legends responded by scoring 3 runs in the bottom of the 3rd inning. Drew Mullaney (Boxford, Ma) started things off with a walk then back to back hits by Hindle and Carey.  Carey then scored on a pass ball to give the Legends a 3-1 lead.  The Legends added one more run in the 4th inning before Nokona hit back to back Home Runs to cut the lead to 4-3.  The Legends held on for the win by getting a ground ball back to the pitcher to end the game.  Patrick Clemmey got the win on the mound and Jack DiFilippo got the save. The Legends are now 9-1 on the young season. 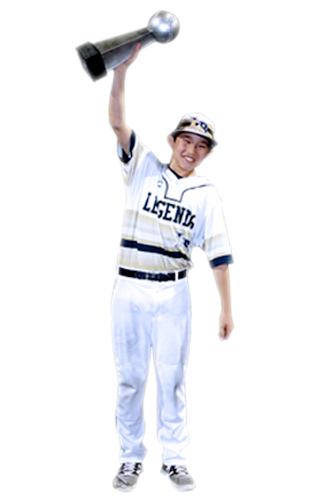 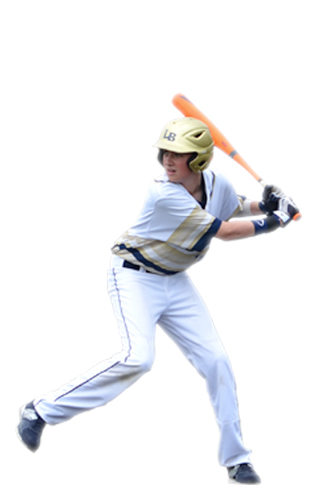 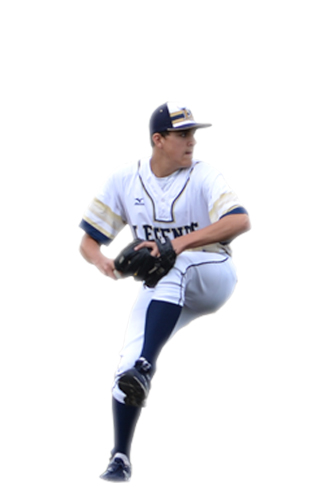